I am facing an buildtime error while compiling showing that “ Entry point ( _main) undefined. For architecture arm64.”

I have tried by changing the standard architecture to armv7 only but I couldn’t solve it?

Can anybody help me please?
Thanks

Can you post a screenshot of your project structure (the screenshot should include the Project Navigator which shows all your files that make up the project). 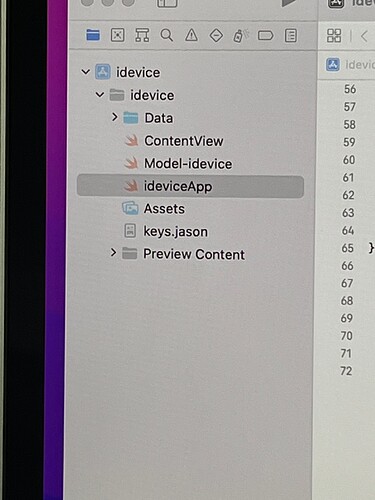 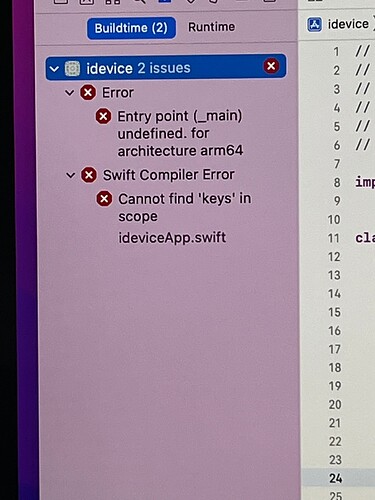 Can you show the code inside the file named ideviceApp. This file is the entry point to your App so that should look like this:

Your keys.jason file should be named keys.json. json is the correct file extension for any data file that uses json code.

When you post images of your code, use the built in screenshot app rather than take a photograph. Photographs of code are sometimes unclear and very hard to view.

With the Mac ScreenShot App, you can capture the entire window, the entire screen or a section of the screen.

If you just want a small section, press Shift + Command + 4 which will change your mouse pointer into a set of crosshairs. Click and drag diagonally across the screen to capture the section you want. When you let go of the mouse button, the image will be saved to your Desktop and will be named something like “Screen Shot YYYY-MM-DD at HH.MM.SS am/pm”.

Other screen selection options are available by pressing Shift + Command + 5. An options bar will appear near the bottom of the screen. You can even video record your screen.

Thanks Chris, for your reply.
I tried to put above listed code . But it did not work out for main@.

Hello Chris, I would also like to know that, how can I create instances in ARkit app same like MVVM model architecture of SwiftUI app . I mean how can call specific function instances and update ARView in making ViewModel of AR kit App.

Can I use the protocol like Obsevable Object, Observed Object, Published Properly etc.

At the moment I am just guessing what is wrong with your project. It would be more helpful if you shared your complete project so that I can work out what is going on. The little pieces that you have shared have not been enough to make any sense of it.

You can share it via DropBox or Google Drive. In either case, create a share link to the project and post the link in a reply.