Maybe you can relate but when I’m working through Chris’s videos, I find myself just copying parts because I have no clue what they mean sometimes. I understand some parts but like all these new methods being called with all these crazy parameters is so confusing sometimes.

I’m in the same boat. I feel like I understand variables, classes, loops, etc on thier own. However, when it put it all together, or when I think about my own project I still have no idea how to pull that off. It’s easy to simple rote repeat what Chris is doing, but I’m not really happy until I can either understand, apply, and then correlate what he’s doing to other projects. My advice (and this is blind leading the blind here) is to watch the videos twice. The first time, grab a cup of coffee, watch, and understand with no distractions. If you still don’t understand watch it again. The second or even third time around type along with him. I’m missing key points when I try to type along.

Additionally, I find that reviewing the Swift and Xcode documentation BEFORE watching his videos helps.

Anyway, thats my .2 cents. I hope this helps, and trust me, you’re not alone.

Everyone learns in different ways. The key is to keep building the different Apps that are taught in the tutorials from Chris. Eventually things start to fall into place the more often you create different Apps.

You will be working away some days and all of a sudden you will say to yourself, “Now I get it”. I call them Eureka moments. That will happen all the time as your knowledge builds.

Remember that Chris has been a developer for many years before he decided to start teaching so he has plenty of background experience.

I find his teaching style relaxed, methodical and he takes the time to explain things as clearly as he can.

Hey download the swift playground app. That may be childish to use but you’ll learn swift to the core

Hahaha I am not alone. When I did the War Card last week, it feels like it, just following everything. Then I re-do the whole process using my own assets. It helped a lot on the second time. And Chris is correct, it will slowly fall into place. Now, I just completed Lesson 5 of Match App…man, my nose is bleeding but I will not give up. I will complete the Match App, and re-do it again with my own assets. Btw, I am 45 with zero coding knowledge. Let’s enjoy the journey!

Yes, I agree. Furthermore, once you’ve built the app while following the tutorial, then try to recreate the app afterward from scratch without the tutorial. Maybe then you’ll be able to understand and implement the different techniques.

What I think here is missing is the research part, I google concepts and do some reading on them after some of the exercises just to understand it better. Still, after the reading I can see that I miss the implementation experience so just reading isn’t a silver bullet (even Chris shared his experience in beginning tutorials on how just reading failed him).

What would be a good addition to each video is to add few links for people to do follow up reading and learning, can be from outside sources if it’s not available on this page (e.g. swift book, coding sites etc.).

I feel the same way… but as other’s have noted: do it a few times. I’ve noticed that I can follow along and get my code working, then I’ll go back and listen to the lesson again and watch to hear how it all comes together/works. I’ve also noticed the more I do, the more it starts to make sense.
Also I have found when I get stuck, posting questions here will get you answers and explanations quickly.

I’ve been out of the programming scene for a long time but I had a decent aptitude for it. Programming is a lot like math in the you have to just learn the mechanics first and after some repetition, the logic of it starts to sink in and yoi begin to understand why or how the code works.

I’m near the end of module 3, and I still don’t fully understand The logic of the collection view methods. But what I’ve done is after each segment, I start a new project from scratch and recreate it and reference the video only as needed. And I repeat that process until I don’t have to check the video. Then I do the next segment, and I recreate it all from scratch from the beginning part that I previously mastered and then adding on the newest part.

I inevitably make a lot of errors and I try to experiment along the way and resist checking the video or my original code until I’m just completely stumped. In making mistakes, and especially logic errors, and in correcting them is when you really start to better understand the nature of the code. I spent 3 or 4 hours thr other day languishing over a very small logic error and in rewriting the code all sorts of ways trying to fix it, it reinforced stuff I had already learned.

It’s a bit pain staking and for me when I do that, I get totally consumed and time itself goes really fast somehow as I’m trying to solve those kinds of puzzles. I’m not sure I’ll ever be a great or even good programmer, so I’m probably not qualified to give advice, but if the lessons hold your interest and more importantly, if the coding aspects and problem solving capture your attention, I’d think you are doing fine. This isn’t easy stuff and takes time to learn. I feel like in these first two lessons after a few weeks, I’ve learned more than I did as a Computer science major for 3 semesters back in the 80s taking FORTRAN, COBOL and pascal. There’s a lot of info packed into these lessons and unless you are a straight wizard, give yourself time to understand it along with Repetition and focus.

Hi Chris, I am new to Coding, I have watched a lot of Chris’s videos and currently following his 29 day beginner course. When learning anything I like to follow everything exactly, which is why I am stuck. I am on Lesson 8 and when Chris brings up the editor assistant, my page is different and I’m not sure why? I’m on a 2013 Mac using Xcode 11.6.

The simplest way to get Xcode to open up in Assistant Editor mode AND make sure that it is linked to the right swift file is to start with the storyboard selected and the ViewController, you want to make the connections to, visible.

Next is to press and hold the Option key down and then click on the swift file you want to use to connect the outlets, actions, view etc to, from the storyboard. This will work every time and cause you less grief than other ways of getting Xcode into Assistant Editor mode.

Thanks Chris, have been doing that but still can’t bring up the same screen that shows class: viewcontroller, my screen shows UIvewcontroller.h and has 642 lines of code? Cam

Have your main.storyboard file open

Now hold option on the keyboard and click on ViewController.swift

Then let go of option

Did it open ViewController.swift???

Thanks MikaelaCaron, my menu does not have viewcontroller.swift, mine has content view.swift, clicking that opened where I need to be. I was clicking on view controller in the view controller scene. Got it now thanks.

I now see the problem.

When you created your project you should have selected Storyboard rather than SwiftUI as the user interface. 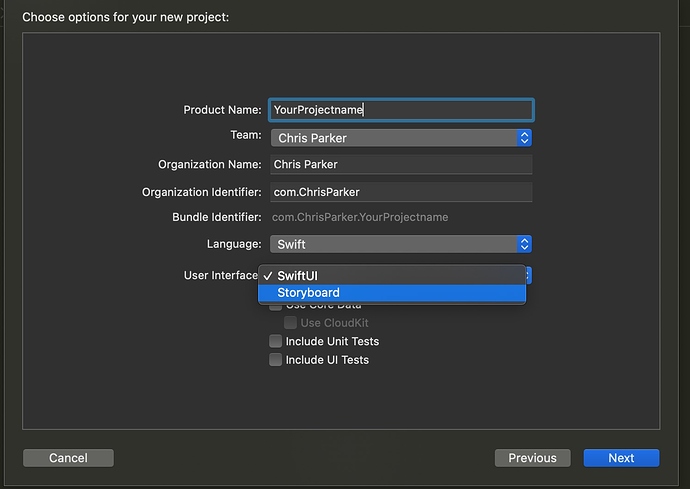 You create your layout in Main.storyboard.

Thanks Chris, is that due to being an older model Mac? Can I change that now or not needed?

No that’s not the reason.

Xcode 11 allows you to select between SwiftUI or Storyboard as the User Interface. SwiftUI was introduced last year and is rapidly gaining popularity but the CodeWithChris courses concentrate on Storyboard applications.

In time Chris will likely introduce a SwiftUI series for those interested.

Ok that makes sense, thanks for clearing that up

No problem. You should be good to go now.

Good luck with getting the War Card app running.