in lesson 08 and 09 , you mentioned this line of code at CardCollectionViewCell model:
// Keep track of the card that gets passed in
self.card = card,

basically we didn’t use that tracker we used the card which was passed to the func, it will change a lot of things actually , I don’t know maybe you can explain , but remaking it with // won’t change anything in the program. !!! correct if am wrong.
thank you Chris in advance and really love your courses a lot.

The “self.card” is the optional variable of type Card which has been declared in the CardCollectionViewCell class.

The “card” variable is the value given to the function configureCell().

You could have also rename a variable for better understanding:

Please move this post to the App Development Category.

I understand that , even if I change it to self.theMainCard it won’t do anything ! even if I mark it with // as a comment , it won’t change anything, because its never used through the program , Chris said we need to have a property to keep track of which card the cell is suppose to display !, what am not getting is that it was never used ! through the code! you can have a look on the code in .zip file at that lesson and see by color as well , we used the card which has been passed to the function. see it was use on this line self.theMainCard = card
and that’s it no other place and we didn’t use it as property of the function in any other class !
you

If you comment (//) the “self.theMainCard = card” line, the application stop working as you cannot return the card tapping the cell… I don’t think your code is correct

did you try it ? I just downloaded the zip file on lesson 9 and commented the two line I mentioned with // and run the application the whole process and logic were working fine.!!!
I wish I could say its my code , but its the code attached with the lesson…
have a thorough look into it and try it and let me know !!

I have tried with mine (I followed the tutorial and I could have done something wrong too!) and it failed

just download the zip file and comment that two lines and you will see
plus you can know which variable you are using by looking into the code color !!

Which version are you at?

From the file given by Chris for the beginning of lesson 9 (M3L09 Lesson Source File.zip), if you comment the line

am using Xcode Version 11.4.1 , i think I will record a video and send the link to show you.
even the flip card work fine I can see both of them when its match …
but have u noticed the color of the code … that is another clue that we are not using theMainCard variable ! 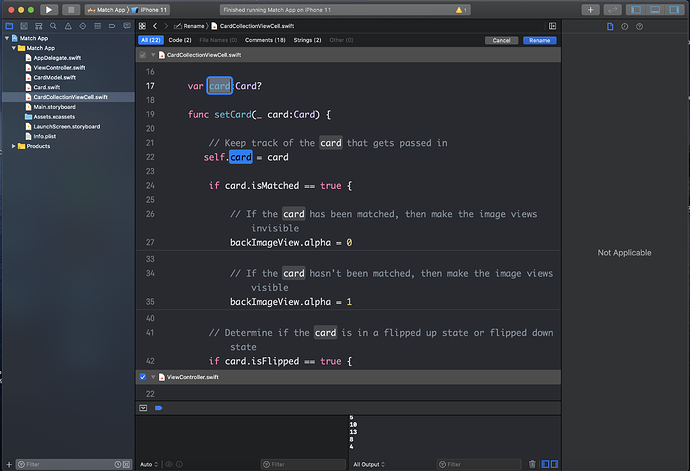 No. I think you get confused where I am starting only now to understand how its all work… I will try to explain what I understand…

Card is the class created in “Card.swift”

(until now, we were talking about the variable “card” that I have renamed for your understanding “theMainCard” above)

Now, our variable “card” from point 1 is equal to our first “Card” from “cardsArray” (cardArray[0] if indexPath.row = 0 in my example).

but as “card.isMatch” is false, it exit the function “configureCell()” (with “return”) and the second cell (IndexPath.row = 1), then the third… until they get recycled!

I hope this will help you to understand how it works and that I didn’t make too many terminology mistakes - I am a newbie too!

Maybe Chris (or someone from his team) can correct where I am wrong if so.

Now that we have demonstrate that the value is used, could you maybe share your project so we can have a lot why it is acting weird?

here its true that self.card is not used on the function, however, it is used in the next functions (flipUp, flipDown)

where the card (self.card) .isFlipped property is set to true or false (if flipDown)

removing or commenting out the “main” card will give an error that card?.isFlipped = true is using an unresolved identifier

this is based on lesson 9 source code by chris