I am in Challenge #8 and I am not sure if I am doing what the challenge is saying.

I don’t know if this these 2 task are correct:

1- Make all 4 properties have the private access level
2- Declare a method called getDetails which returns the value of the details property.

Yes, that’s great.
What you could do as an added exercise is declare an instance of the struct Car like this:

That will print to the console:

Note that the 3 properties year, make and model are all close together so since you are using string concatenation, you could solve that by changing the line from :

which puts a space between the properties

Or you could even make it a single line in the computed property like this:

which is using string interpolation.

Thank you very much for your help. I really appreciated!!! I am learning a lot!

Have a nice day!!

I am on the challenge 8 as well. I am so confused of how the answer got ‘private var’ - I never saw that in the lesson.

So, my questions is:

Thank you for your time and understanding. Looking forward to your answer!!!

I’ll add the details of the challenge that Chris Ching set and then talk about the questions you asked. 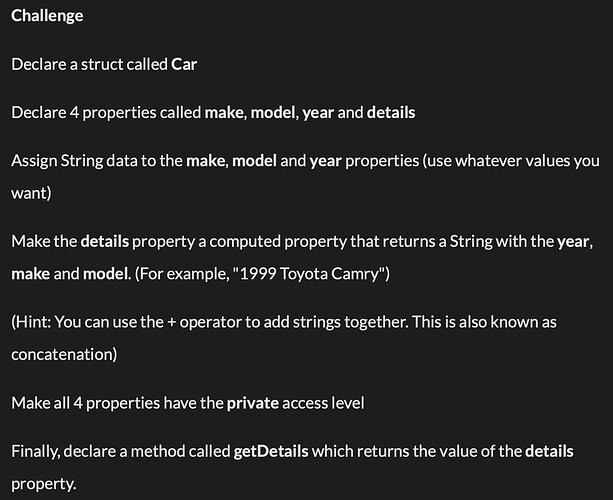 Adding private to the variables you have declared prevents them from being accessed externally. This means that make, model, year and details are only known to the methods and computed variables within the struct. From that you can see that getDetails() is the only object accessible externally.

This concept may take time to sink in but let that be OK. A lot of syntax in Swift can take time to understand. We all started at the ground level in the learning curve and that includes me.

It’s also OK if you opted to look at the solution to see what needed to be done.

To prove that the function getDetails() works what you need to do is declare an instance of the struct Car and then use that instance to reference getDetails(). You could do something like this:

So breaking that down:
myCar is a copy of the struct Car and the double closing brackets () is what is known as an initialiser.

Now you can access the available method inside the struct by saying myCar.getDetails().
The dot . is known as using dot notation which enables you to access function and properties inside of structs (and classes). The only one you can access is getDetails().

I put that inside the print() function so that there would be some output in the console below the code editor.

If you try to access any of the variables you will get a compiler error. Eg, if you said:
myCar.make you will receive a error saying:
'make' is inaccessible due to 'private' protection level"

That makes more sense now - Thank you for your help.

Here is what I have coded - however, it did not returned in the console. What did i do wrong? Could you please help?

Below the struct definition (the last closing brace) add the two lines:

and then hover your cursor on the next line number below the print statement and tap on the play button.

If you are not seeing the Console output, then press Shift + Command + C

This NOW make total sense to me!!! Thank you so much for your help - I greatly appreciate it!!

As an aside, you can format your output from getDetails by doing this:

What that does is use string interpolation by embedding the variables in a \ () so that you can have spaces between the properties when printed. The other way to do it is like this:

which achieves exactly the same result but using string concatenation.

This is interesting - I like the interpolation alot better. Its less messy and looks alot cleaner!!!