Clock app not possible on IOS?

unfortunately I am not a developer so far.

)
For now I asked some friends to develop a clock app for me, but they say this is not possible for the newest version of IOS. Is that true?
That would be very sad, since I plan to do a few apps!

If you mean using SwiftUI then here is a screen shot of an App that I created. The App is adapted from an original design by Amos Gyamfi ‘nimbbble’ on YouTube 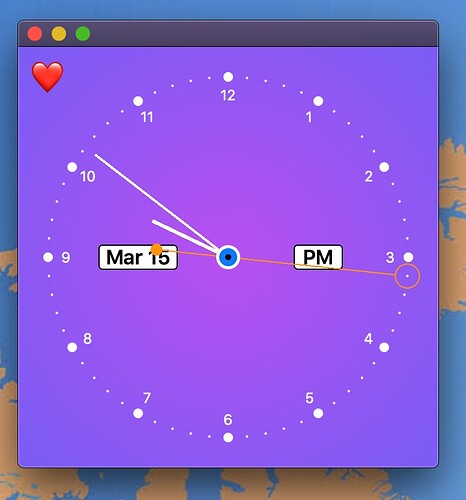 So it can be done.

PS: the work of Amos is very beautiful!!!

My friend, who is an IOS app developer, still says, that the iPhone doesn’t allow these kind of apps anymore.

Do you know (or does anyone know) something about this new policy of Apple?

What exactly is your friend trying to say? Is he saying that Apple will not allow a Clock App to be submitted to the App Store?

I first asked him to do a screensaver for me (that is how I called my clock app at the beginning). He first wanted to do it, but later he sent me screenshots of - I think the Xcode - page: “choose a template for your new project”, which shows no screensaver template for IOS (unlike the template options for MacOS)
Later I argued that it would be a clock rather than a screensaver. He then answered, that “it’s not possible because iPhone does not provide the option”. ???

maybe its possible as a widget or something, like putting the widget as your screensaver/lock screen… i saw an app called flip clock that seems to do just that https://apps.apple.com/us/app/flip-clock-digital-widgets/id1181028777

Yes, that is exactly what I want and since this clock and also other analog clocks exist in the App Store I have no idea why it would be not possible to realise my idea.
Maybe I have to ask another person to develop it…