How to protect your app ideas?

Hi! These courses are phenomenal! I’m feeling excited and motivated to get going on an app idea. I’m wondering if there are any courses or insights on how to go about protecting app ideas? Can app functionality be protected as intellectual property? How do you prevent someone from duplicating / expanding on your app functionality in the future?

To be honest, that’s a concern of mine as well. I have an App idea, one I’m actually surprised doesn’t exist… but anyway… my concern as well.
Code with Chris has a course named, How to Build an App. I think he goes over it a little on there. I honestly need to review his course material for that course.

Welcome to the community @tayloruhl23

How do you prevent someone from duplicating / expanding on your app functionality in the future?

You can’t, people could always make a similar app. Lyft vs Uber, they do the same thing.
The tons of flappy bird clones, the tons of expense tracker apps.

People can always copy your idea, but you being the one who has the idea you can always innovate and will be ahead of the copycat person

Honestly there’s generally not a reason to protect an app idea. The app idea is just that an idea, it’s execution that matters.

Also most people’s ideas aren’t unique, and people generally won’t take the time to steal your idea and build it themselves. They have their own ideas to build

Can app functionality be protected as intellectual property?

It is your own intellectual property, but software is something that constantly changes, so you’re not really protecting a single “thing” You can copyright / trademark your name, but not really functionality of the app itself.

Like google docs vs Microsoft Word, they’re both word processors and they do the same thing, but how the go about accomplishing that is different for each

There have been cases where people have created third party Apps to fill a gap in functionality only to find that down the track in later software releases that Apple have included that exact same functionality which renders the third party App redundant. It’s generally known in Developer circles as being “sherlocked” though Apple would deny any such attempt to do so.

Here’s an article describing the reason the term “to be Sherlocked” came about:

What Does It Mean When Apple “Sherlocks” an App?

Perhaps you’ve read that F.lux, which reduces eye strain and helps you sleep, is being “Sherlocked” later this month. What does that mean?

As Mikaela said you can’t really “protect” an app idea, as the Uber vs Lyft example shows.

However, I believe the best course of action is a strong brand.

Someone may copy your app concept, but they can never steal your brand (provided you deposit a trademark). Today there may be plenty of Uber, Lyft, Bolt, Grab… but that’s okay. The market is big enough for all of them.

Personally I tend to say “I’m gonna call an Uber” even if I may eventually call a Bolt or some other taxi service. I tend to say “Google this” to say “search this on the internet” even though there are other search engines. That’s (one example of) the power of a strong brand !

I also heard somewhere that if your business idea gets copied that’s a good thing - it means you’re doing something right! And when that happens you can either spend ressources (time, money) to defend your idea by suing them, or you can spend ressources to improve your product so that it simply remains the best offer.

So work on your app’s name, logo, design, features, marketing campaign, and everything that makes your brand identity. Maybe buy a trademark. And work on making your app the best it can. That’s all you can really do and I think it should be plenty enough.

Branding is important, but I’d say scale is even more important.

I think they call it blitzscaling. You want to grow your user base as fast as possible. Once someone is comfortable using an app or service, it takes a lot more to get them to switch to another similar one.

I didn’t know the term blitzscaling, thanks @CeilingTiles!

But the whole “grow or die” strategy behind blitzscaling is probably not for most of us here. You’d be lucky to be onto a business opportunity this big, and even if you are, it would require lots of capital to boost and sustain growth.

For indie devs, slow and steady seems good! And creating a strong brand is more feasible for everyone (and cheaper

Disclaimer: not speaking from experience, I’m just discussing ideas I haven’t launched my app yet!

I have been thinking about this a lot—for months before I read this post—because it’s important. (Keep in mind I am not an expert in any of these fields.)

Protecting intellectual property has always been hard. You can copyright the name and trademark the logo, but can you actually patent the app or any part of it? I doubt it. Even if you did, what would that do? Most likely you’d just get patents in the US or maybe more if you’ve got the inclination, time, and money. But it still won’t prevent people from copying your work. Apple and Samsung sue each other all the time over patent violations on their phones. It’s better business for them to violate patents and pay penalties than not.

Everyone here seems to agree branding is super important. It starts with a great name and then a great logo and UI/UX design … but it’s so much more than that. Branding is everything your company stands for and embodies. Years ago I read a really good book, 4D Branding by Thomas Gaad. It’s a topic worth brushing up on. If you don’t have the time for books consider an audiobook. Audible is great. And I really like Philip VanDusen too, on Instagram:
https://www.instagram.com/philipvandusen/?hl=en

Fred Nerby is great too for UI/UX design. Nonetheless, I’ve always find inspiration in his work, particularly his unofficial re-design of Facebook (scroll all the way to the bottom of his page).
https://nerby.com/

Also take some cues from Sir Jony Ive, Apple’s former head of design and a living legend. (Consider what phones looked like before the iPhone to see how revolutionary his work is.) Jony once said something to the effect, “The ultimate design is for something to look undesigned. As if how could it look any other way?” Simplicity is the ultimate sophistication. Don’t get fancy. The fact is Apple have made it relatively easy to make great looking apps simply leaving as much of the design as you can up to them, meaning using Apple San Fransisco font (the default for iPhones) and just spacers and padding and basic things like that.

In my humble opinion though, marketing is the single most important challenge we will face when launching our apps. Don’t fall into the Field of Dreams trap: “If you build it, they will come.” They won’t. They’re going to have to know about your app before they even consider downloading it. The reality is, if someone sees your app and thinks you’ve touched on something that will really resonate with a lot of people, someone is going to copy it. The concern, of course, is that they do a better job making the app or signing up new users.

That’s why blitzscaling—growing your user base as large as you can as fast as you can—is so important. Once someone is comfortable using a service it takes something extraordinary for them to switch. (Consider: how likely are you to change your cell phone provider, ISP, or credit card? They know you don’t want to switch, which is why they offer you things like new TVs or iPads to do it… and still most of us don’t switch.)

Years ago I read another really good book called The Anatomy of Buzz by Emanuel Rosen. The premise is simple: companies spend fortunes on advertising with mixed (and somewhat unmeasurable) results. (“I know half my advertising budget is wasted, I just don’t know which half.”) In all likelihood you may see upwards of $100 million worth of advertising today alone, but not much of it will sway you. Meanwhile, if your best friend tells you, “You’ve got to watch this great new show on Netflix,” you probably will. Personal recommendations trump advertising—and they’re free. One strategy Google used with Gmail was invitations. In the early days, you could invite your friends to sign up for Gmail, but not all of them—only two. The scarcity made the invitations more valuable and thus people more likely to share them with friends who they thought would actually use Gmail. Basic math says if you tell two friends, and they tell two friends, and so on and so on—at the 16th level of that communique there are 65,536 invitations being sent out.

One last thing to consider—we are tiny nothings competing with billion dollar behemoths… and that is our advantage.

David and Goliath is another good read, by Malcolm Gladwell. If you don’t have the time you can get a great synopsis here: 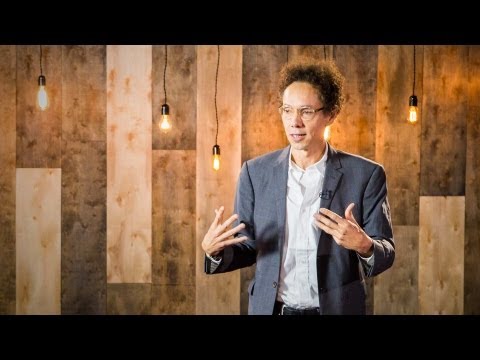 If you were to ask any of these companies what they worry about, it’s not each other—it’s two guys in a basement. That’s Steve Jobs and Steve Wozniak, or Larry Page and Sergei Brinn, or Bill Gates and Paul Allen. Or maybe it’s just one guy, like Jeff Bezos, or Mark Zuckerberg … or you. What they worry about is the one they didn’t see coming, who caught them by surprise.

But make no mistake about it, when they do see you (your app), if they feel threatened by it, they’ll fight. And they’ve got the resources to put up an absolutely massive effort. I always image that with the app that I one day (soon) hope to launch, that if Facebook wanted to, they could probably replicate its functionality in a matter of days and then leverage their 2 billion monthly active users to try to get it widely adopted. That’s why blitzscaling is so important—you want to achieve that critical mass before than can copy you. They may try to copy you. They may try to buy you to acquire your IP, user base, or talent. Or they may try to buy you just so they can shelve your app and have one less competitor.

Recently I’ve started comparing writing my app to writing a novel in Chinese. First you have to learn the language … then you have to write it. It’s a massive commitment undertaken by a very few people. Actually, it’s two massive commitments… I respect you all and have appreciation for all of you being here and participating in this journey with me.

They key is to not give up. I almost gave up the other day, frustrated with concurrency… Thank you, Chris Parker, and to all of you who support each other, and me, in our efforts.

As aspiring app developers we are entering a field where it’s possible to make millions, or even billions, of dollars. Never before have I had a job where that is possible. This is exciting stuff.

Like I said, I’m not an expert with any of this stuff. I’m just a guy trying to master Swift and take my shot—just like you.