How to write JSON as Swift Struct?

I have a JSON looking like this, but how can I write this as a Swift Structure?
Would really appreciate the help 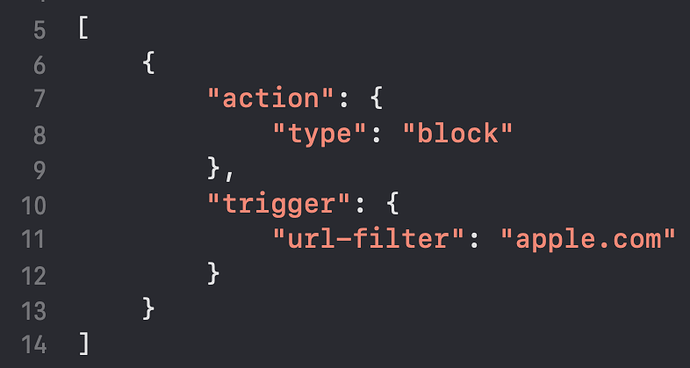 First it’ll be an array of objects. So to give a name of the entire thing object itself let’s call it Obj. Also it’s not a single object, but this is composed of multiple different objects.

Inside of Obj is an object, let’s call it OtherObj. This contains action, and trigger.
Action contains a type, and then trigger contains url-filter.

So pretty much anything that has { } curly braces around it, that is an object with properties inside it

Thanks for the quick answer, I think I get what you are saying.
But would something like this also be possible

I believe so, but I think it’ll start to get weird with the decoding.

Instead of just having Object.decode

Thanks for the quick answer, I think I get what you are saying.
But would something like this also be possible

No, that wouldn’t work. action and trigger are already accounted for as keys in the outer object so you can’t then use also them as keys in the inner object.

You would either need to do this:

in order for this to work using the JSON you provided:

(PS: Post your code as text rather than screenshots. That makes it far easier for people to help you because they can just copy/paste rather than having to retype everything in order to test it out.]

Thanks for the answer, I’m getting a bit confused as what to do.
Let me explain my goal, I currently have this code where I basically write to a JSON file, which works fine. My goal is to create the Friends structure in a way that I end up with the JSON file I linked before.

When it outputs this ["action": ["type": "block"] are the square brackets equivalent to these brackets {} in the JSON file?

When it outputs this ["action": ["type": "block"] are the square brackets equivalent to these brackets {} in the JSON file?

So your initial JSON:

can be decoded into a Swift array of dictionaries:

which, when written more compactly, becomes:

My goal is to create the Friends structure in a way that I end up with the JSON file I linked before.

Either of the three approaches shown to you in this thread will work for that. It just depends how you would prefer to work with your Friend struct.

(And you should call it Friend instead of Friends since it’s a single object. Then, in your saveFriends function, your parameter would read like friends: [Friend], meaning the friends parameter is an array of Friend objects, not an array of Friends objects. Reads much better that way and is easier to understand. After all, code is written for humans to read and understand.)

Okay Great. Thanks for the help, it was really useful.

If you have the time I would really appreciate it, if you could take a look at this post I made last week

How to reload the Content Blocker Extenstion? App Development

Hi, I’m using the “Content Blocker Extension” in my project, and have been informed that I have to call SFContentBlockerManager.reloadContentBlockerWithIdentifier() in my main app to reload the data in blockerList.json. But I don’t really know HOW I should call it. Any ideas?