So I’m doing Module 4, Lesson 13. I have completed the video, but came up with interesting results. 1, my code didn’t need (or want) "}) at the end of the button because I did the updated format. Assuming that’s not the issue since the it built fine.
Anyways, I included the video to show my issue.
https://youtube.com/shorts/5GjrxYt6H-c

on Lesson 14, it appears the same issue exists for you guys too. 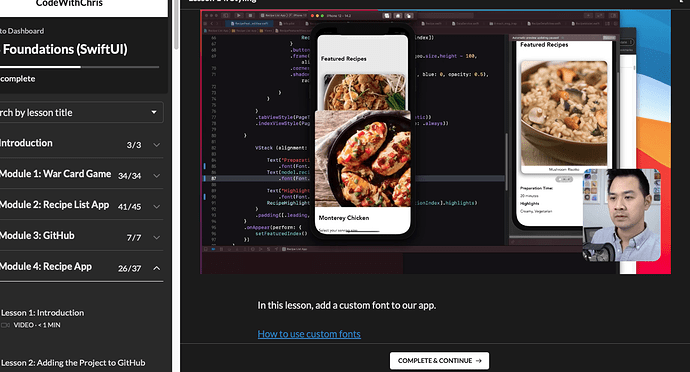 Oh I see there’s a bug video for this fix later down the row of objectives.

By the way, the video link says that the video is private.

Ah yes, I remember that issue showing up when Xcode was updated from the version that was current back then when the course was created. That’s why Chris Ching added the update to the series of Lessons.

Annoying but that does tend to happen at times when there are updates to Xcode. You learn to put up with it and just make the necessary changes when it breaks your code.

Yeah, I noticed it after writing this post. I look forward to progressing, so I know everyone’s answers like you!

What’s viewed as acceptable when more experienced? Like, I know developers look up code still… But like, when swift just came out, there weren’t tutorials but what Apple provided. So how did you guys excel?

What’s viewed as acceptable when more experienced? Like, I know developers look up code still…

There is no way that I can remember how to do everything that I have learned. I constantly look up things that I have not used for a while. That’s normal for just about everyone I would have thought. There is code that falls into place from muscle memory because you’ve written it so often but when it comes to methods you use less often I always refer back to old code as a prompt.

But like, when swift just came out, there weren’t tutorials but what Apple provided. So how did you guys excel?

Here is a link to a Wikipedia article on the history of the Swift Programming Language.

Swift is a general-purpose, multi-paradigm, compiled programming language developed by Apple Inc. and the open-source community. First released in 2014, Swift was developed as a replacement for Apple's earlier programming language Objective-C, as Objective-C had been largely unchanged since the early 1980s and lacked modern language features. Swift works with Apple's Cocoa and Cocoa Touch frameworks, and a key aspect of Swift's design was the ability to interoperate with the huge body of exis A...

When Swift was first introduced I wasn’t even thinking about App Development. I got interested in 2018 just to keep my brain active. I know Chris Ching was doing iOS Development long before that and probably when it was only Objective C.

What you end up doing is looking for people on line who have done the hard yards in working out how things work. Udemy courses, YouTubers like Chris Ching, Paul Hudson, Sean Allen, Mark Moeykens, Stewart Lynch and many more.

It’s a long journey and knowledge is gleaned from many sources. Everyone starts at ground zero knowing next to nothing (in most cases).

I like Sean Allen’s content as well. I’ve looked at Paul Hudson’s as well. His 100 days of SwiftUI. Haven’t completed it yet though.

so how do you know you’ve learned the appropriate amount for a job?

Good question. Not having ever applied for a Developer job (I’m retired) I have no idea what the process is. Sean Allen has quite a few videos on getting a job, what you need to watch out for and how to prepare. Search his channel with “Job interview” and you’ll have plenty to watch.

But like, when swift just came out, there weren’t tutorials but what Apple provided. So how did you guys excel

You’ll never be “100% ready” if you can deocde JSON from an API that’s half of what you need for a junior role, the other have is understanding basic swift programming concepts and being willing to learn

I will also have a hard time getting a junior role in Iowa… I’ve seen Dice.com… do you guys have any recommendations other than typing googling jobs? like junior ios developer… All I mainly see when doing that are senior roles.

All I mainly see when doing that are senior roles.

I’d look for being open to remote, idk the exact job market in Iowa

Google around for jobs, look at LinkedIn, find job boards, go to https://iosdevjobs.com/

Find companies you’d want to work for, and see if they’re hiring by searching their job page