I’m a complete beginner and due to the advanced age of my iMac (14 years and going strong) have had to install XCode 7.2 which only offers UIKit. I’m on session 3 of the Beginner course but am already seeing a number of differences with SwiftUI and am not sure I can get much further. From reading these forums and a little online I think learning UIKit first will stand me in good stead to learn SwiftUI later so I’m happy to continue with it, at least until I can upgrade my computer (aware that I will not be able to distribute anything until I do this but just learning for now).

My question is, are the early UIKit topics (e.g. iOS Foundations with UIKit, iOS Databases with UIKit) pitched at a level where I should be able to follow along without having done a beginner course? I can’t afford to pay to sign up if I won’t be able to utilise them. I have done some HTML coding in the past so conceptually at least I feel some familiarity with what I’ve seen so far, although app development seems more complex.

If I need to look elsewhere for an extreme beginner’s introduction to UIKit along the lines of the 14 Day Beginner Challenge, any reccomendations for good ones will be appreciated. I’ll definitely head back here to learn more as I like Chris’ approach.

Welcome to the community.

Just as a point of interest what model is your iMac and what is the latest version of OSX (macOS) that you can install on it? I may be asking you about something that you have already delved into as far as upgrading your iMac as far as you can in terms of the OS and then getting the latest version of Xcode installed. If you have already been down that path then ignore the question.

There is a video on YouTube that Chris Ching has posted that covers 17 Lessons on topics that will place you well.

The link to the Video is here: 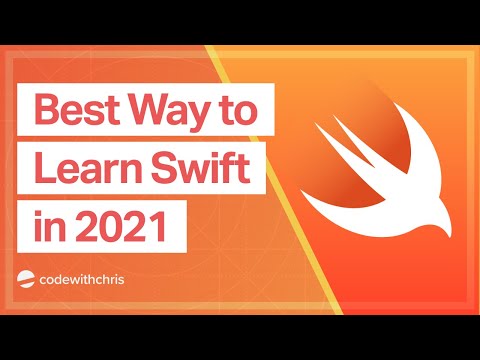 and the topics covered in the video are as follows (screenshot of the notes below the video in the link above): 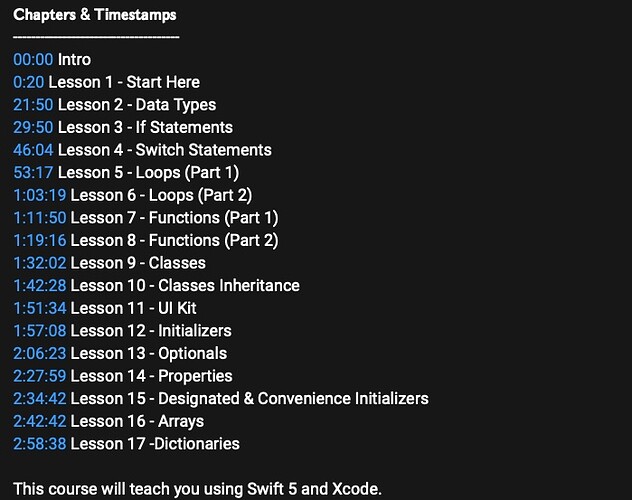 One caveat to note:

This video covers Swift V5 and your version of Swift in Xcode 7.2 is Swift 2 so there might be some code that Chris refers to in the lessons that don’t work on your version of Xcode. That may or may not be a blocker for you so in that case you might need to search his YouTube channel for episodes that targets Xcode 7 which would be videos that were recorded about 6 years ago. Search for:

See how you go.

Hey Chris, thanks heaps for the response and the links, will check them out. I didn’t even think to check if there were videos old enough to cover Xcode 7 – great tip!

According to my research online, your early 2008 iMac can run El Capitan 10.11.6 and that will allow you to instal Xcode 8.2. Not a lot better than what you’ve got but each generation has a later version of Swift.

To be honest, if you could pick up a second hand later model Mac it would be best but understand that maybe that’s not possible at the moment.

All the best man.

Oh thank you I’m going to look into that!

Also hoping I can afford a refurbished Mac Mini later this year which would solve this and a few other issues.

Thanks for your help!